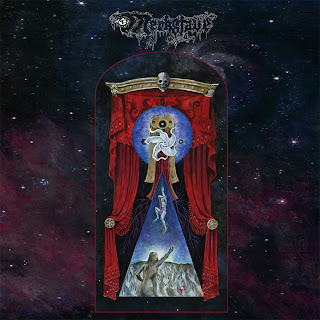 I initially thought Merkstave was just destined to be "one of those bands." You know, the one which shares members with a few of your favorite bands, and yet you can't seem to find any goddamn information on them. Metal-Archives says they released two excessively limited demo tapes in 2011, though recordings apparently date back to 2005, but, aside from an extremely low-quality upload on Youtube, their online presence is all but nonexistent. It seemed that this collective was doomed to rot in obscurity, even with rumors swirling of a finished full-length album swirling around the back corners of the nerdiest of metal forums for the past near-three years.

Featuring members of Leech, Hell, Elu of the Nine, Mania, Velnias, and what seems like the rest of the "Colorado/Oregon doom and black metal" microcosm, Merkstave is by far the heaviest doom band you've never heard of. Featuring professionally recorded versions of their demos Laments for Lost Gods and Spawn of a Lower Star, Merkstave's first, and seemingly only projected full-length effort consists of three long-form offerings of the most despondent, excruciatingly slow funeral doom this side of Finland's Tyranny. This is one of those albums which isn't to be taken lightly, especially for those of the faint of heart. As someone who struggles with depression (don't we all), I find it difficult to listen though this album because it is so brutally, devastatingly honest in its successful attempts at portraying just how alone we are in the universe. If there were ever gods, they certainly aren't here anymore. We simply exist in this vacuum, and Merkstave is here to remind us that there is nothing else in this telluric funerary void. Rarely moving above the pace of a funeral procession through chilled molasses, Merkstave's minimal approach to doom hits the listener right where it hurts with soul-crushing heaviness, bleak, somber melodies, and a pleasant balance between "pretty" and downright nasty.

I have a big problem with doom bands who constantly romanticize depression like it's some beautiful motivator, because, let's face it, depression sucks. Sure, it brings about some great music, and yeah, you can totally romanticize it with big, beautiful melodies, which Merkstave embraces, but there's so much more going on underneath. Big, murky drones, minimalism to an excess, and gross shrieks are pit against the melodic majesty, creating a wonderfully unique dichotomy therein, echoing the complexities of true human emotion. It's a rough listen for sure, but it's definitely rewarding, especially for those of us who have waited far too long to hear Merkstave come to posthumous fruition.

Our friend Harold over at Hammer Smashed Sound's declaration of Merkstave as "the epitome of doom" is right on the money. This is explosive, angry, miserable, and goddamn heavy. The stars have aligned against us. Remember that. Fans of the usual funeral doom crew take note, but approach with caution and antidepressants. In the usual Pesanta Urfolk fashion, there's the "regular ol' LP" version out now, but members of the "elite subscription service" better keep their eye out for the ridiculous special edition which is the epitome of labelhead Adam Toruella's reckless excess and artistic vision. It'll be worth the money I don't have. Get sad.

-Jon
Posted by The Inarguable at 1:04 AM