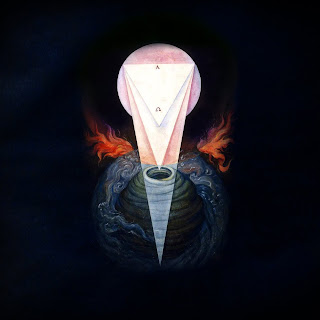 It's been a good minute since we've heard from our protagonists in Preterite, what with conspirator Genevieve Beaulieu's most recent activity in her "main" project Menace Ruine, whose Alight in Ashes was released to critical acclaim late last year. Pillar of Winds, Preterite's debut, was a fast favorite here at the Inarguable camp. Rife with dreamy harmonium drones, thoughtful guitar work, extended composition technique, and Beaulieu's undeniably powerful voice, we finally got to hear the doom folk album Nico never wrote. It was near perfect, and criminally underrated, gracing a scant few year-end lists. Hell, even I overlooked it in my year end list. Stupid. Stupid. Now on Union Finale, Beaulieu's own imprint with her Menace Ruine compatriot S de la Moth, Preterite returns with their much more subdued sophomore effort, From the Wells.

Given its predecessor, I approached From the Wells with the expanded mindset which one should normally possess when listening to a band stepped in extended, drone-centric texture-crafting, and I left rather surprised. Though Preterite is still undeniably a droning, folk-based project, I was elated to find that, instead of stagnating, Beaulieu and Hamilton had taken a much more songwriting-driven approach. Taking cues from minimalist composers, Eastern classical music (primarily in the drone department), and, naturally, the neofolk greats, From the Wells fuses these elements into a beautiful mash of repetition, soaring melody, and deep, hypnotic drone. In a successful separation from her other project, Preterite has shed the heavy, doomed sound found on Pillar of Winds for something much more airy and spacious, but still retaining the same emotional heaviness found on their debut.

With the aforementioned restraint in sound and concentration on space and emotion, Preterite have truly refined their style, creating something entirely new. It's quite striking to see what "pulling back" can do for a band, stripping the layers down and leaving a stark sense of nudity. Too many try to layer everything ontop of their ideas in fits of self-indulgence and the powerful ideas end up getting lost in the finished product. Not the case with From the Wells. This is stark beauty.

"Gleaming Escape" is a beautiful exercise in layered pulsing. A continuously driving guitar washes over dense layers of varied bowed instruments (I think I hear a kemençe?), and Beaulieu's near-mantric vocal rhythms each push and pull against each other in waves of glistening sound. I more often than not find myself swaying in my seat to this particular song out of any other off of From the Wells. It might be "shorter" in comparison to a few of its album companions, but "Gleaming Escape" definitely packs a powerful punch. Big things come in small packages.

From the Wells is set for a September 22nd release, and the gorgeous arigato-pak CD can be pre-ordered direct from the artist here.