I would like to start off by stating (complaining?) that top whatever lists are always extremely hard for me. I don’t really listen to music as it comes out, I jump back and forth through the decades from day to day and may sometimes go an entire month without listening to anything released after 1990, and then hit many current releases the year or two following their appearance. For these reasons my list may appear somewhat weak due to the fact that I haven’t explored many 2010 albums at this point. That being said, I do love every one of the following sincerely and believe they are all outstanding releases! Here goes:
1.    1. Iron Maiden – “The Final Frontier” [Universal]
Well I certainly saw this coming! Maiden are, in my extremely un-humble opinion, the greatest metal band to grace the genre in its entire history. The Final Frontier holds true to their 30-year tradition of tried-and-true bombasticity (if that’s a word) and pseudo-intellectual fantasy. This album saw the band nudging their boundaries ever so slightly, with programmed drums on one track and some interestingly out-of-the-box guitar harmonies and tone. Though they are beginning to show their age (especially singer Bruce Dickinson and drummer Nicko McBrain) they are a rare example of a band that does not pretend to be 20 years younger in order to relive their glory days. The accompanying North American tour for this album was a resounding success though it comprised of nearly all songs from Maiden’s most recent 4 albums. The Final Frontier takes the high Maiden has been on since Dickinson’s 1999 return and kicks it into high gear. 2. Agalloch – “Marrow of the Spirit” [Profound Lore]
This album was, like the others, kind of a given. Agalloch are reaching new levels of musical maturity and grace, and Marrow of the Spirit showcases wonderful composition, production and lyrics as such. Of particular note is the epic Floydian “Black Lake Nidstang”, which features some of vocalist John Haughm’s best work to date, both lyrically and aurally. In addition, the drumming of underground metal great Aesop Dekker (who has toured with Agalloch since 2007) finally has a chance to shine on an Agalloch record. His loose, sparse feel provides exactly what the sweeping, atmospheric compositions need to give them a little punch without going overboard. Production-wise, I absolutely love this album! Agalloch production, especially drum sounds, has been a point of contention with me in the past. Though this CD retains the rough quality of previous ones, it is obvious that extra time and effort was spent on getting things mic’d, mixed and mastered properly. The first time I listened to this album all the way through in one go was during the first big snowfall of winter in late November. I walked around outside for the entire duration of the disc and loved every single second of it, which makes me certain that this is going to be a personal favorite for a long time to come.

3. Alcest – “Écailles de Lune” [Prophecy Productions]
This is one of those albums that will always have a special place in my heart. The songs on this disc are rarities in that they are so emotionally charged it makes listening to them a heavy, cathartic event. Listening to this album plunges me into the deepest, blackest depths of despair and at the same time lifts me up to the highest radiant happiness one could ever dream of. I’m going to just leave it at that. 4. Enslaved – “Axioma Ethica Odini” [Indie Recordings]
Axioma Ethica Odini is an incredible album, as should be expected from the masters of mythical metal themselves. In many ways this disc reminds me of 1970s progressive and hard rock, harkening back to classics such as Gentle Giant and King Crimson. It seems that Enslaved have pushed these influences forward even further on this masterpiece, which makes it appeal to me even more. The clean vocals on this album are absolutely incredible, like none that have ever been heard on an Enslaved record. Despite the epic songwriting and wonderful ebb and flow of tension and release on this album, the production kind of ruins it. Axioma Ethica Odini is the loudness war at its worst, and the waveforms of the tracks on this CD are giant, thick bars of compressed noise. Though most people casual listeners won’t notice, the drums and bass on this CD have little punchiness left in them and the guitars sound blown out and fuzzy. Once again shitty production knocks a perfect album down the list. 5. Gorillaz – “Plastic Beach” [Virgin]
Oh man… while I love the trip-hop musings of Gorillaz’ first two albums, there is something to be said for straight-up hip hop if it’s done well, and this album most certainly is. From beautiful orchestrations to groovy 70s funk-style drumming and basslines to Snoop Dogg, this album is undeniably eclectic. Damon Albarn’s poetic indictment of consumerism and wastefulness provides a powerful, serious message for the songs, but they do not overpower or bog down the album with overly dark imagery. “Empire Ants” is by far my favorite track, showcasing Albarn’s wonderful guitar/vocal work before exploding into a trippy psychedelic world of synth bass and surreal funk… it’s like swimming in a sea of Jell-o underneath a gold-glitter night sky with a lava lamp moon. This album features some amazing sample and programming work (particularly on the latter half of the album) and some great flow by a bunch of rappers I’m not cultured enough to recognize. Definitely another one to keep around.
6. Reggie Watts – “Why Shit So Crazy?” [Comedy Central Rec.]
Ok, so this one is actually a DVD/CD, but I’m only putting the DVD here because A) having the visual along with the audio is important for this “genre” and B) I haven’t managed to find a copy of the CD yet. Anyways, Reggie Watts is basically one hilarious guy who uses stream of consciousness and improvisational comedy in his live shows. A lot of this is made up of a cappella songs he does by beatboxing and singing into a loop station and various effects pedals. It’s pretty much “anti-comedy” at its finest, as he spends about an hour or so using as many words as possible to say as little as possible. Really quite original and definitely worth a watch! In the immortal words of Mr. Watts himself: “Obviously, over an obvious amount of time, there’s an obviousness that's just… you can’t miss it!” 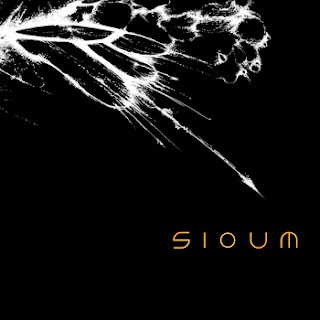 7. Sioum – “I Am Mortal, But Was Fiend” [Endless Field Studios]
Hailing from Chicago IL, Sioum released their first album this year. The disc was self recorded and mixed in Sioum’s basement over eight months, but you wouldn’t know it! The production on this CD is absolutely incredible, especially for a debut offering. The band consists of a guitarist, drummer and keyboardist, meaning there are no vocals whatsoever. I find that this helps gives the songs a certain sense of purity and primal energy, conveying raw power, anger, fear, sadness and happiness without words to get in the way and clutter them up. Influenced heavily by video game soundtracks, Sioum fuse synths and piano with post rock and doom riffs to create something totally unique and very very addicting! This album quite a masterpiece and these guys are definitely headed for big things in the future! 8. Kylesa – “Spiral Shadow” [Season of Mist]
I hadn’t heard of Kylesa until I reviewed this CD for the Inarguable last month (check it out!). This is one great sludgy band! They have two drummers and two singers (male and female), and they blend old-school hardcore very well with stoner rock and classic doom influences. This album is trippy but light and happy at the same time, which is a nice change from the “HOLY SHIT MY PSYCHE IS IMPLODING” trend in “stoner” genres recently. 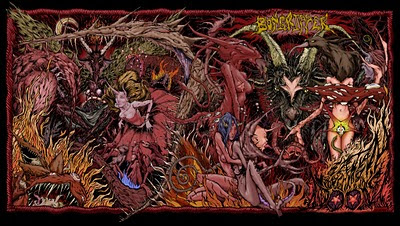 9. Bongripper – “Satan Worshipping Doom” [Self-released] DOOOOOOM. Seriously, get this fucking CD (or LP if you’re lucky enough). This instrumental doom group from Chicago IL really knows what they’re doing… worshipping Satan. I guarantee this is some of the heaviest shit you’ll ever listen to. 10.  Defeated Sanity – “Chapters of Repugnance” [Willowtip Records]
Well, if you like Brutal Tech-Death you’ll love this, and if you don’t you should get it anyway. I don’t know too much about these guys except that this is some of the fastest, most mind-bendingly complex metal out there these days, and their drummer must have at least 8 splash cymbals (don’t worry, he uses them all). This shit will seriously melt your fucking face, and you’ll love it. Death metal simply doesn’t get any better than this. The bass drops, the slams, the epic blasting… and the fucking insane guttural vocals! It’s almost too much to handle… but it’s just the right amount.
Honorable Mentions:
11. Vit - “-“ [Self Released] Awesome and honest Ohio black/doom metal with great songwriting.
12. Dead Meadow -“Three Kings” [Matador] Classic 70s revival stoner rock, this is a compilation of great live material and a few new tracks.
13. The Flight of Sleipnir – “Lore” [Eyes Like Snow] Very well written stoner/folk metal, great earthy production as well.
2010 was an average year for metal and music in general. Mainstream metal got shittier and more overproduced as usual, borderline-mainstream metal bands sold out and got shitty. Production got even worse than last year, and concert tickets and t-shirts got more fucking expensive. Same old same old. I hope next year we see a return to classic production standards on more metal albums. Other than that, there is plenty of good music out there, and plenty of shitty music (both metal and otherwise). Oh and I'll always be game for more Maiden albums, and another US tour would be nice...
Posted by The Inarguable at 10:55 PM