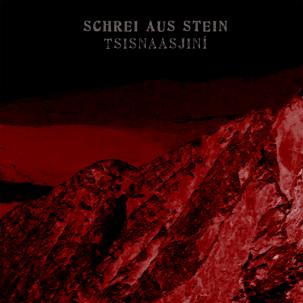 Her name is Mount Blanca, but the Navajo have known her for generations as "Tsisnaasjini." Forever blanketed by thick quilts of snow and obscured by mountains, it is obvious as to why the Spanish named it Blanca... yet the Navajo name, meaning "Dawn Mountain" or "White Shell Mountain" seems all the more fitting.

Utilizing this ancient name, R. Hagen's (you might remember him from Crucial Bliss drone act Encomiast) latest sonic adventure under the name Schrei Aus Stein guides the listener up the frozen monolith, showing that maybe the Spaniards got the name right, at least in color.

The album-opening "Light on Wings" trudges against the freezing wind through the snow; distant, whispered vocals echoing from snow-obscured caverns. The many layers of guitars, keyboards and field recordings are reverberated into a sepulchral mass, holding you down, pushing you back. You are freezing to death.

"Like Arctic Moons" picks up the pace, but only slightly. Again utilizing thick walls of glistening, ice-coated guitars and reverb-soaked, howling wind vocals. Moving into the fastest portion of this album, we are presented with an almost-Velvet Cacoon-like blasting section, effortlessly deconstructing itself into a metallic drone which ends the track (I like the wolf samples, too). This track is absolutely frigid, as if icicles were dangling from the moon itself.

The closer, "Vague As Blown Smoke," is by far the crown jewel of this album. Thick, black metal slush, alternating between the slow crawl of "Light on Wings" and the raw, freezing speed of "Like Arctic Moons," with a wall-of-sound quality that is comparable to playing every single Schrei Aus Stein song on top of each other. Droning on and on, however dissonant, this track is a snowstorm of pure bliss.

"Tsisnaasjini" in my opinion, is R. Hagen's reminder to everyone that he still has a background in drone, and this is a wonderful translation of his drone career into black metal. Cold enough to remind one of "the good old days" of black metal, yet forward-thinking, abstract, and, dare I say, "shoegazey" enough to be a modern black metal release, Schrei Aus Stein is "a force to be reckoned with." Packaged in a wonderful DVD case (complete with a fun postcard-related game, buttons and stickers) and limited to 250 copies, you better pick one of these up before they're gone forever! Grab it from Crucial Blast here.

-Jon
Posted by The Inarguable at 2:52 PM