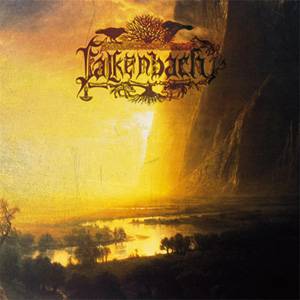 For over five years after the release of Heralding: the Fireblade the mysterious hooded skald, Vratyas Vakyas, remained silent. Then, from somewhere in the wilderness, the deep, familiar voice of a battle-horn rang out and echoed off the cliffs once more, shaking the roots of the World Tree; Tiurida, “Glory,” colored its call and signaled the return of Falkenbach!
Vratyas has certainly carved out an effective template for the folk-viking metal of Falkenbach. Each album is similar; the minimalist epic style provides for continuity across the catalog which can be built upon to whatever degree he feels necessary for each release. 2011’s Tiurida is familiar Falkenbach, rife with triplets and heavy hypnotic riffs, but with a fresh brightness about it. This brightness often goes under-represented, however, and as with all Falkebach albums, there are some depressingly weak moments scattered among the strong.
The mood-setting “Intro” leads into the excellent “...Where His Ravens Fly...” This track plays upon the expectations of Falkenbach’s initiate but manages to sound fresh and exciting. The power from this track is somewhat lost on the following, “Time Between Dog and Wolf,” which is also similar to “Runes Shall You Know.” Both are catchy, but they lack a certain feeling of completion. It is important to be in the mood for minimalism when listening to them in order to get the right effect. In all, they are successful tracks with their individual strengths, but they may be the most stock-Falkenbach tracks of the album, lacking the interesting variations one might have come to expect, judging by Heralding: The Fireblade.
Two of the highlights of the album are “Tanfana” and “In Flames.” Both display great examples of the bright, indeed glorious tendencies of the album. “Tanfana” is an instrumental that sounds like a happy feast of abundance; the trickling water in the end only completes the sense of verdant warmth. This track is also a bit more structurally complex which may be why some of the more repetitive songs feel incomplete in comparison. “In Flames” is not a musical tribute to the Swedish version of Chimaira, but another strong track which features a nice middle section that can only be described as “pretty.” Unfortunately this part only happens once and Vratyas sees fit to repeat the main sections for the remaining four minutes.
The official final track “Sunnavend” is proper acoustic Falkenbach and harkens straight back to Ok Nefna Tysvar Ty. But that is one of the issues I have with it. Fine track though it is, I feel as if “Sunnavend” is a weak closer to the album, and this where my small rant begins...
Those lucky enough to have purchased the digipack or any other special edition of Tiurida will be treated to a far more appropriate album closer than “Sunnavend.” Apparently reconstructed from the Læknishendr demo of 1995, “Asaland” is offered as a bonus track that buyers of the regular jewel case edition will sadly be denied. To me, this instrumental is the true ending to Tiurida. If not for lame marketing decisions, “Asaland” would provide the perfect degree of balancing brightness to the album and make it feel well rounded upon completion. Without this track fans are likely to be left wanting after “Sunnavend.”
It is difficult not to compare Tiurida to its predecessor. Heralding: The Fireblade”, with its narrations and balance of repetition and variation, felt like a natural and dynamic product of years of development. Perhaps because it was intended to be released long ago, Vratyas seems to have really used his time to perfect his ideas for that album. It is, of course, imperfect but it leaves me feeling satisfied at the end (no doubt thanks to the brilliant closer “Skirnir.” Tiurida brings a number of fine new things to the table, many of which satisfy, but overall feels as if Vratyas focused on some areas more than others to such a noticeable degree that in certain places it is simply lacking.
I am not terribly disappointed in Falkenbach or even in Tiurida but more in the fact of there being yet another album released in the last year-and-a-quarter that feels like an unfinished step in an interesting direction. I enjoy the album and believe that fans will, too; rejoice in the good bits, but be prepared to skip some tracks.

Falkenbach Official MySpace
Posted by The Inarguable at 1:24 PM