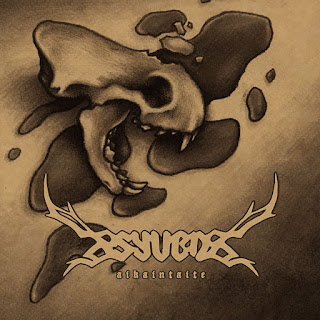 The days have inevitably grown shorter, the sun lazily rising much later in the day, only to retreat before the early evening. The Earth is shedding its vivacious fauna, only to cocoon itself in white, only to emerge anew the next season. The annual cycle is waning, and soon this year will pass on, making way for a new cycle and new life. The inevitability of the coming winter and the death of the old year is a powerful symbol for our constant fight against the threat of death. As we grow, our wills might grow stronger, but our bodies weaken with every new day and, while we might not consciously know it, we wage war against finality with every new second. We don't think about it, but we survive. Aikaintaite, the debut album of Finnish duo Syven, is a celebration of that survival.

The beautiful stylistic marriage of multi-instrumentalist A. Tolonen, formerly of Nest, and vocalist A. K.-S., who has an extensive resume related to the British "extreme doom metal" scene, has proven to be one of the most formidable seen in folk-related music yet. Now, I say "folk-related" because Syven has undoubtedly transcended the realms of folk and neofolk, presenting something much more introspective and primal, not to mention wholly unique. Tolonen's mystical, naturally resonant kantele, a traditional Finnish lap harp, acts as the instrumental centerpiece, utilized both as an atmospheric base as well as a medium for aggression (check out the distorted, almost metallic closing climax of "Tuulenvire" (Gust of Wind) to see what I mean). Thanks to Tolonen's work under the Nest moniker, the kantele has proven itself to be one of my favorite instruments, and his further experiments with the beautiful instrument with Syven only strengthens my obsession.

A. K.-S.'s magnificent voice is what truly places Aikaintaite on its own pedestal. Alternating between a strong classical voice, deep whispers, chanting, and animal sounds, K.-S.'s deep study and outstanding emulation of both modern and ancient styles of singing further Syven's more "genuine" sound. It is this deep, sorrow-filled voice that hearkens back to the glory days of Ulver and Empyrium, when masculinity and being in touch with one's spirituality were one and the same, something which many artists have seemingly forgotten nowadays.

A celebration of Finland's natural and spiritual heritage and its perseverance for thousands of years, Syven's Aikaintaite is a marvelous adventure through the snow-covered pine forests of the taiga. As picturesque and vivid as it is haunting and desolate, the seemingly perfect artistic union between A.T. and A. K.-S. has taken the worlds of folk and ritual-based ambient music to new, personal heights which will be exceedingly difficult to meet, let alone approach. Aiktaintaite will be available from the recently resurrected Vendlus Records on December 6th.