We don't make a HUGE deal out of it, but pretty much the entirety of the core staff at The Inarguable loves The Body. For a couple of us, our first experience was mindlessly following Jon to a show he'd booked for them in Chicago in 2010.

We didn't really know what to expect, but with the opening chords of "Ruiner" we thought "If nothing else, this will be heavy." We weren't ready.

Then Chip switched on the other two thirds of his cabinets. I don't think I've ever seen jaws genuinely drop before, but my god if that wasn't the heaviest thing. What we didn't get from their show was what we enjoyed on record later: The Body's trademark strange samplenoise and remixperimentation.

In an interview with Mike Simpson of Invisible Oranges, Chip summed up what has to be the core of The Body's recorded sound: "You can’t get a record loud enough to shake your stomach, which is what we do live." "Master, We Perish" is another installment in a series of attempts to make it happen anyway: right there in the production is the carefully-sculpted sound of speakers about to rip themselves apart that I've only rarely even heard in the HNW cults that are supposed to be that and nothing else. Even when Lee's distinctive drums are alone, they're in a blur of stomach-shaking clipping. 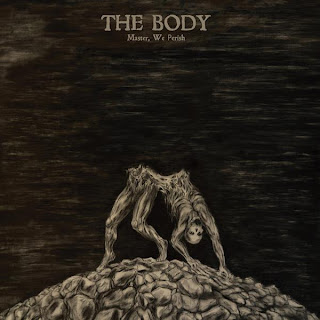 "Master, We Perish" is basically a whirlwind of hate. Even in 18 minutes of the heavy-repetition, limited-development songs The Body specializes in, there's everything from fast, crushing almost-d-beats, distorted shrieks, oddly guitarless ultra-heavy ultra-doom, heavy guitar ultra-doom, and Neurosis tom beats recreated in heaviness Neurosis can't touch to Assembly of Light Choir over painfully hanging chords. I just wish they'd wait a little longer and give us 40 or 50 minutes to revel in.

Go get your ears blown out. Just remember they've only given us three songs and you'll need one of the full-lengths to finish you off.